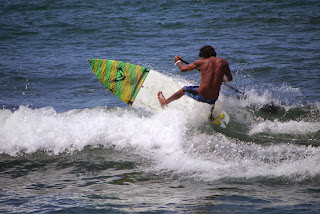 This was the second and final day of the Surf Competition. It included a race on stand up paddle boards  with four loops around a course of buoys, and on each loop they had to land and run up to the start on the beach and then re-launch through the surf for the next lap.

For the finals of the surfing in the afternoon they used an electric radio-controlled helicopter with a camera attached to film the surfers from up close.

Janet, a friend of Sue and mine in Vancouver, had convinced me to extend my stay for another week so she could come and visit.

She caught the bus from the airport and Margaritas is about a hundred meters from where you are dropped off in Sayulita.  In the afternoon I headed over to Margaritas where we had planned to meet.

Our timing was perfect, Janet had just walked in as I arrived, and we sat with a beer before I lugged her bag up the hill to Chulavista.

As we headed down the hill for dinner at Don Chow's we went by Casa Januita so Janet could see where I was before, and we met and got talking to Cathy and Brian who are are staying there now. They invited us over tomorrow night for drinks on the rooftop deck.